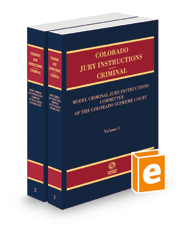 What's new or updated › Front of the book ›

The Committee added 19 new chapters, expanded comments, revisions based on 2016 legislation, corrections to substantive errors that appeared in COLJI-Crim. (2015), and corrections to nonsubstantive formatting irregularities.

Also included are verdict forms and tables of statutes and rules.