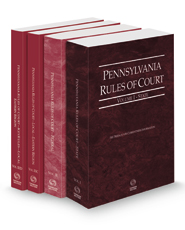 Each KeyRules outline corresponds to a specific pleading, motion, or discovery request, providing the applicable procedural rules and integrating them into sections by rule type (e.g., timing, format, filing and service, etc.).

The procedural rule content is further enhanced with on-point caselaw and industry-leading Thomson Reuters secondary sources. KeyRules provides attorneys, paralegals, and other legal staff with the information needed to draft, file, and serve their court documents quickly and correctly.