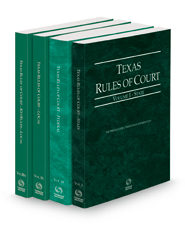 Texas Rules of Court – State, Federal, Local and Local KeyRules (Vols. I-IIIA) provides the rules of court and civil practice guides needed to practice before the state, federal, and local courts of Texas.

Texas Rules of Court - State (Vol. I) provides state rules of court, including: