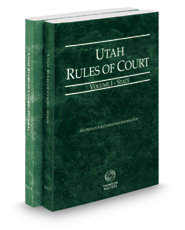 Email this page
106664255
106664252
One time purchase – eBook (Learn more)
$272.00
Purchase the current version only, no updates will be sent.
Monthly pricing – eBook
$20.00/month
Our Assured Print Pricing program offers predictable monthly pricing and capped year-over-year price increases. Choose between 2, 3, 5, and 10-year agreements. All updates, new editions, and revisions are included in your monthly payment and delivered automatically, as soon as they become available.

Utah Rules of Court - State and Federal (Vols. I-II) provides the rules of court needed to practice before the state and federal courts of Utah and offers attorneys a compact yet comprehensive procedural law library they can fit into their briefcase.

Utah Rules of Court - State (Vol. I) provides state rules of court, including: