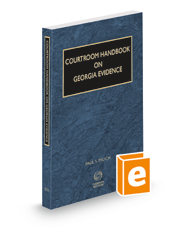 Courtroom Handbook on Georgia Evidence is a quick-reference guide to the rules of evidence in Georgia courts. The book fully incorporates the 2013 Georgia Evidence Code. The author served as a reporter for the State Bar Committee that drafted and promoted the new rules in the Georgia General Assembly. The text is organized into more than 125 easy-to-navigate topics, presented in alphabetical order. The publication includes: