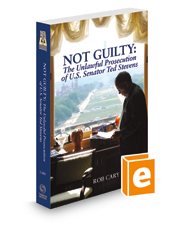 Not Guilty: The Unlawful Prosecution of U.S. Senator Ted Stevens

Written by one of the lead attorneys for U.S. Senator Ted Stevens of Alaska, Not Guilty: The Unlawful Prosecution of U.S. Senator Ted Stevens describes the litigation before, during, and after the trial charging Stevens with corruption. Stevens was found guilty by a jury, but the judgment was immediately overturned following revelations of gross violations of Brady and other misconduct by the prosecution team of the Public Integrity Section of the Department of Justice. The verdict, however, led to Stevens' loss of his seat in the Senate.

The book is instructive in its intricate detailing of defense strategies and prosecutorial missteps, particularly in regards to Brady discovery, and author Rob Cary notes that less-privileged defendants commonly face challenges similar to those in the Stevens trial. Cary also comments on the Schuelke Report, a special investigation of the Public Integrity Section ordered by the trial court and released in 2012. As a result of his experience during the trial, Cary prescribes a number of initiatives to level the playing field between criminal defendants and the government, particularly with respect to discovery, handling of witnesses, and ways to address prosecutorial misconduct.