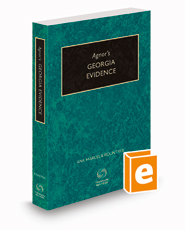 Monthly pricing
$36.00/month
Our Assured Print Pricing program offers predictable monthly pricing and capped year-over-year price increases. Choose between 2, 3, 5, and 10-year agreements. All updates, new editions, and revisions are included in your monthly payment and delivered automatically, as soon as they become available.

Professor Agnor originally wrote Agnor's Georgia Evidence to set out the basics of Georgia Evidence Law and to contrast it with the Federal Rules of Evidence. Now that Georgia's rules are based largely upon those federal rules, the book has been updated to be a practice guide for use under the revised Evidence Code. Key subjects covered in this title include: