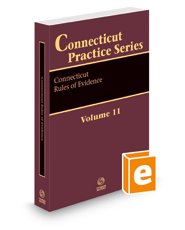 • Rules of Evidence for United States Courts and Magistrates

Two separate indexes to the state and federal rules allow you to find applicable rules fast.