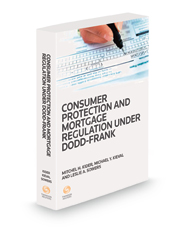 When the Dodd-Frank Act's newly established Consumer Financial Protection Bureau (CFPB) took over responsibility for interpreting and enforcing the Enumerated Consumer Laws in July 2011, the industry was preparing for the massive regulatory changes to come. Since that time, the CFPB has made significant progress in fulfilling its mandate. In particular, Congress finally confirmed the CFPB's director, the CFPB began supervising non-depository lenders and other financial services providers, and the CFPB issued eight new complex regulations implementing Dodd-Frank's requirements for the mortgage industry. Consumer Protection and Mortgage Regulation under Dodd-Frank provides the text and a detailed section-by-section commentary on:

Each chapter sets forth the text and section-by-section commentary on the specific title the chapter discusses. This version is newly revised to include the recent regulatory developments, as well as an explanation of the many changes that the Act heralded for the mortgage industry and for consumer financial protection in general.