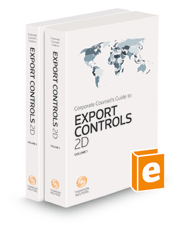 Stay abreast of export control laws with Corporate Counsel's Guide to Export Controls. Covering compliance and defense of enforcement actions, this title contains the text of several parts of the Export Administration Regulations and analyzes the: