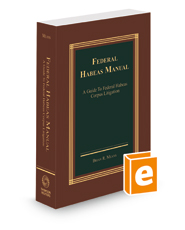 Federal Habeas Manual addresses the various aspects of federal habeas corpus litigation with special emphasis given to the sweeping changes enacted by the Antiterrorism and Effective Death Penalty Act (AEDPA) of 1996 and established by the Supreme Court and federal circuit court decisions. It covers AEDPA standards of review, including the deferential “unreasonable application” standard and the “clearly established federal law” restriction.

Cited in over 450 federal court opinions, the manual is organized to allow users to quickly find answers to their habeas questions: controlling legal standards are clearly identified, case examples illustrate how habeas doctrines are applied by the courts, and related legal doctrines and issues are cross referenced. The text discusses preliminary issues involving:

Federal Habeas Manual addresses affirmative defenses, including exhaustion, statute of limitations, and procedural default. It explains the various methods of record development, including expansion of the record, evidentiary hearings, and discovery. It also examines the nonretroactivity doctrine established in Teague v. Lane and its progeny and provides a detailed analysis of district and appellate court practice in habeas cases.