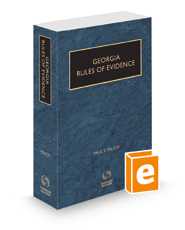 Professor Paul Milich is widely regarded as the premier authority on evidence law in Georgia. His Georgia Rules of Evidence thoroughly analyzes evidentiary issues and provides cross-references to sections of the Georgia Code, caselaw, and rules. It focuses on the 2013 Evidence Code, but it also maintains discussion of the law under the old Code where applicable, identifying the differences between the old Code and the new Code. This publication is essential for the type of in-depth research required for trial and appellate briefs. Topics featured in the book include:

An appendix sets out the 2013 Georgia rules in their entirety.

For a quick-reference guide to the most frequently encountered evidence issues, also consider Professor Milich's companion title, the Courtroom Handbook on Georgia Evidence.