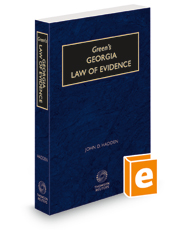 Out of stock
(details)

Green’s Georgia Law of Evidence fully incorporates the current 2013 Evidence Code. Many changes in the rules regarding admissibility of evidence occur as the courts hand down decisions interpreting the new law. The softbound, annually issued format of this publication provides regular updates on these changes.

In addition to adding much new content, a substantial portion of the material from the prior hard-bound edition was rearranged and rewritten, while the classic discussion was maintained where relevant or necessary for context.

Key subjects covered in this edition include: