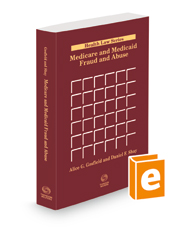 Monthly pricing
$146.00/month
Our Assured Print Pricing program offers predictable monthly pricing and capped year-over-year price increases. Choose between 2, 3, 5, and 10-year agreements. All updates, new editions, and revisions are included in your monthly payment and delivered automatically, as soon as they become available.

Medicare and Medicaid Fraud and Abuse introduces fundamental concepts as well as detailed analysis of the aspects of Medicare and Medicaid fraud and abuse, including regulation, caselaw, advisory opinions, and more. It is updated annually to reflect the dynamism in this area of the law.

Alice Gosfield has been the author since 2003 and has been assisted by Daniel Shay since 2010. It is written specifically for practicing lawyers, regardless of whether they represent plaintiffs, defendants, or those who merely want to avoid problems.