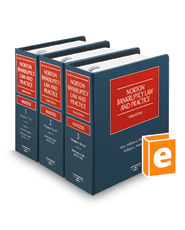 Representing the work of scores of bankruptcy judges and practitioners, Norton Bankruptcy Law and Practice offers step-by-step guidance for the entire bankruptcy process for Chapter 7, 9, 11, 12, 13, and 15 matters, as well as 500-plus practice forms. This comprehensive 13-volume treatise covers: