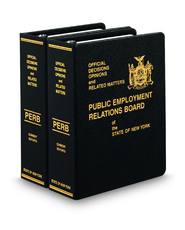 New York PERB Reports is useful in the negotiation, interpretation, and administration of New York public sector collective bargaining agreements and private sector matters previously heard by the State Employment Relations Board (SERB). This reporter provides up-to-date access to relevant administrative caselaw, rules, and regulations. It includes summaries and analysis of administrative agency and court decisions. Recognized as the official reporter by the Public Employment Relations Board (PERB) of the State of New York, it uses a unique, copyrighted indexing system that allows you to quickly do cross-jurisdictional research into similar reporters for California, Illinois, Florida, Michigan, New Jersey, Ohio, and Pennsylvania.