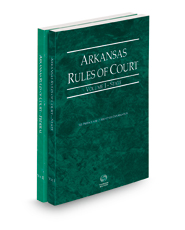 Arkansas Rules of Court – State and Federal, 2021 Edition (Volumes I-II) provides the rules of court needed to practice before the state and federal courts of Arkansas and offers attorneys a compact yet comprehensive procedural law library they can fit into their briefcase.

Arkansas Rules of Court – State (Volume I) provides state rules of court, including: