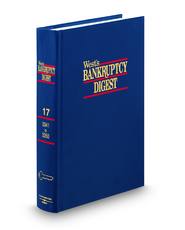 This Key Number Digest, West's® Bankruptcy Digest, contains all headnotes, classified according to West's® Key Number System, for the reported decisions of the U.S. Bankruptcy Courts, plus the bankruptcy decisions of the U.S. District Courts, U.S. Courts of Appeals, and the U.S. Supreme Court, and bankruptcy points of law from state courts. Key Numbers in the new Bankruptcy Digest begin with number 2001. The earlier Bankruptcy key numbers, 1-2000, will become dormant and will no longer be assigned to headnotes of new bankruptcy cases hereafter reported. Translation Tables allow you to move quickly and easily between the old and new Bankruptcy key numbers.