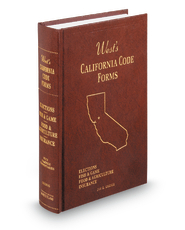 Requisite forms for some of the most extensively regulated activities and businesses in California. Most forms relate to transactions with the regulatory agencies, but also include administrative and some litigation forms. Elections forms include voter registration, ballots, election contests, and recalls. Fish and game forms include applications and licenses for collecting, transporting, importing, hunting, and fishing. The food and agriculture heading includes forms for pest control, chemicals, and fertilizers. Insurance forms cover contracts for premiums, renewals, loss, rescission, and cancellation.