Home > Law Books > Other > Disrobed: An Inside Look at the Life and Work of a Federal Trial Judge 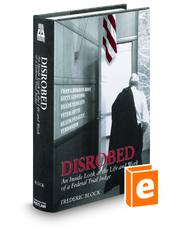 Disrobed: An Inside Look at the Life and Work of a Federal Trial Judge

Written for the legal community and the general public, this book explains, in practical terms, the perspective behind some of the most newsworthy and sensational cases of the last 20 years. Few, if any, judges have commented on the cases that have appeared before them. Judge Block critiques some of the historical practices of the legislature and the bench; educates readers about the death penalty, racketeering, gun laws, drug laws, discrimination laws, race riots, terrorism, and foreign affairs; and intimates the more humble aspects of being on the bench, e.g. the choice to use humor, death threats against members of the bench, brushes with celebrities, witnessing how popular sentiment can override the facts of a case, racist underpinnings of the drug laws, and more. “Judge Block gives the reader an engaging, often humorous account of his life, as always, and a compelling introduction to the world of a federal judge, whose decisions are subject to plenty of public scrutiny but whose decision-making process remains a mystery for most Americans.” PRESIDENT BILL CLINTON, Founder of the William J. Clinton Foundation and 42nd President of the United States