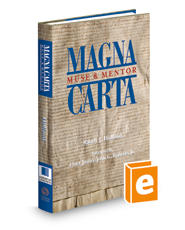 Co-published by the Library of Congress and Thomson Reuters, Magna Carta: Muse & Mentor is an illustrated collection of essays by renowned legal scholars. The Magna Carta was sealed under oath 800 years ago in 1215 and is widely known to be an important part of the historical process that led to the rule of constitutional law in England and beyond. Magna Carta: Muse & Mentor was published in conjunction with a Library of Congress exhibition of the same name that commemorates both the 800th anniversary of the Magna Carta, as well as the Library's role in preserving the Lincoln Cathedral copy of the Magna Carta during WWII. This book features: