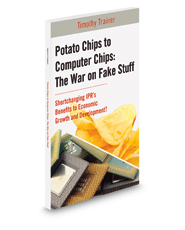 Potato Chips To Computer Chips: The War On Fake Stuff

The international trade community could soon celebrate a major milestone if it wishes, as the World Trade Organization's intellectual property agreement (TRIPS) approaches the 20-year mark. In Potato Chips to Computer Chips: The War on Fake Stuff (Shortchanging IPR's Benefits to Economic Growth and Development?), the author contends that enforcement has been the overwhelming focus of IPR activity during the two decades of the TRIPS era.

International intellectual property standards may have been agreed to with promises of IPR's contributions to economic growth and development, but has the rhetoric of IPR's links to growth and development been matched by action? The chorus of complaints about the expanding and creative ways to infringe IPR may continue to drown out the voices advocating in favor of more programs to educate and raise IPR awareness. This book argues for the need to dedicate as much in resources and energy to IPR education and awareness programs as has been dedicated to enforcement, given that all the enforcement in the past 20 years has not quieted the call for more enforcement.

The book challenges IPR owners, their trade groups, and governments to be as creative in addressing the benefits of IPR through education programs as they have in promoting enforcement.