Home > Law Books > Other > When Worlds Collide: Bankruptcy and Its Impact on Domestic Relations and Family Law, 4th 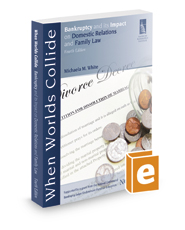 When Worlds Collide: Bankruptcy and Its Impact on Domestic Relations and Family Law, 4th

The United States is in the midst of a bankruptcy boom, with filings nearly doubling over the past 20 years. With the rising tide of bankruptcies has come an increasing opportunity for conflict between the work of the state courts and the federal bankruptcy courts, and between state domestic relations law and bankruptcy law.

Divorce and bankruptcy are similar in that each attempts to provide a "fresh start." However, the objectives of divorce are not necessarily consistent with the goals of bankruptcy. Recent changes to the Bankruptcy Code make it harder to discharge certain obligations that arise in divorce, and help illustrate the differences between the objectives of bankruptcy law and family law.

When Worlds Collide: Bankruptcy and Its Impact on Domestic Relations and Family Law provides state judges with a brief, readable primer on the bankruptcy law that impacts their subject-matter jurisdictions. These materials provide a satisfactory starting point for any domestic-relations lawyer who needs a basic understanding of how bankruptcy intersects with family law.

Appendixes feature relevant sections of the Code, as well as a list of cases and articles on the issues discussed within the text.