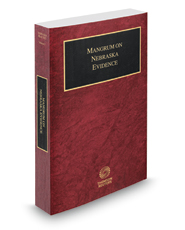 Monthly pricing
$42.00/month
Our Assured Print Pricing program offers predictable monthly pricing and capped year-over-year price increases. Choose between 2, 3, 5, and 10-year agreements. All updates, new editions, and revisions are included in your monthly payment and delivered automatically, as soon as they become available.

This source for Nebraska evidence law enables you to quickly locate a particular rule and case law that applies to your issue. It discusses legislative history behind each rule, and highlights decisions by the United States Supreme Court that impact the operation of the Nebraska Rules of Evidence. Also reviews thousands of decisions by the Nebraska courts interpreting the Nebraska Rules of Evidence. Discusses controversial areas of evidentiary development in which the courts have not yet clearly resolved important evidentiary issues. Reviews expert testimony a step-by-step as developed by the federal courts under the auspices of Daubert, Kumho and Joiner.