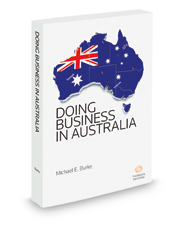 Specific chapters focus on issues such as:

The antitrust and competition law chapter was authored by Elizabeth Avery, a partner with Gilbert + Tobin, and recognized as a leading competition lawyer in Australia by external peer and client surveys, including the International Who's Who of Business Lawyers and Euromoney Expert Guides. The taxation chapter was drafted by Reynah Tang, a partner in the tax group at Johnson Winter & Slattery, who has been recognized in several industry guides including the International Tax Review, Asia Pacific Legal 500, Chambers Global Guide (Asia Pacific), and Best Lawyers Australia. Rani John, a partner with Gilbert + Tobin and recognized in Chambers Asia Pacific, PLC Which lawyer?, Doyle's Guide, and Benchmark Asia-Pacific, drafted the dispute resolution chapter. Dr. Gordon Hughes, a partner in Davies Collison Cave, a former president of the Law Council of Australia, and a past president of LAWASIA, drafted the chapter on IT and E-Commerce. John Corcoran, a principal of Russell Kennedy, drafted the real estate chapter. The joint ventures chapter was drafted by Fred Chilton, a highly experienced corporate and commercial partner of Emil Ford Lawyers. Michael E. Burke, a partner with Arnall Golden Gregory, edited the volume and drafted several chapters, including those on foreign investment approval, mergers and acquisitions, and compliance with the U.S. Foreign Corrupt Practices Act.