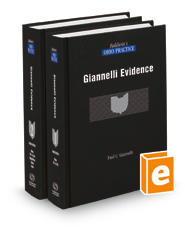 Evidence, 4th examines the Ohio Rules of Evidence, rule by rule. The text of each rule is presented, followed by expert commentary and discussion of how the rule has been interpreted and applied by the Ohio courts.

Sections of the Ohio Revised Code regarding evidentiary matters are provided, as well as a variety of editorial enhancements, including: