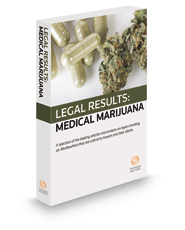 Moreover, this volume contains a full analysis on current medical marijuana laws and medical necessity defenses to marijuana laws and their respective judicial interpretations around the country. Likewise, a full nationwide analysis is provided on the propriety of an employer's hiring and firing decisions regarding employees using medical marijuana, as well as an illuminating article on the fine line between legal and illegal marijuana use. The pamphlet concludes with a number of forms relevant to municipal regulations of medical marijuana dispensaries.