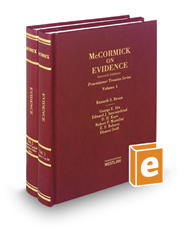 Recognized as the foremost authority on evidence law today, McCormick on Evidence offers comprehensive and authoritative analysis of the rules and theory of evidence with a pragmatic approach.

When there are specific questions of evidence for which a jurisdiction has no precedent, this treatise provides both general theories that may be argued to suggest the answer and varying views from other jurisdictions. Like Dean McCormick's original text, the Eighth Edition continues to provide a pragmatic approach to the law of evidence.

With the 2022 Supplement to the Eighth Edition, Professors George E. Dix and Eleanor Swift have retired and the authors welcome Professors Jasmine E. Harris and Kit Kinports.