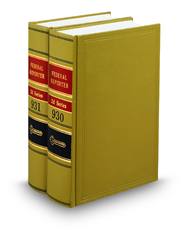 
One time purchase (Individual volumes)
Purchase the current version only, no updates will be sent.

This set is a Federal case law reporter series in West's® National Reporter System. This product covers opinions and decisions from 1925 to 1993 issued by the 13 circuits of the United States Courts of Appeals. Cases published in this product series are enhanced with headnotes, Key Numbers, and Synopses prepared by West's internal staff of highly trained attorney editors. Cases in the advance sheets are ordinarily combined in joint issues for the Federal Reporter and the Federal Appendix, but advance sheets containing material only from the Federal Reporter are available.