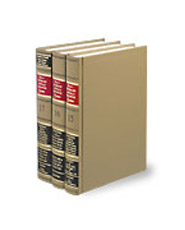 
One time purchase (Individual volumes)
Purchase the current version only, no updates will be sent.
Monthly pricing
$236.00/month
Our Assured Print Pricing program offers predictable monthly pricing and capped year-over-year price increases. Choose between 2, 3, 5, and 10-year agreements. All updates, new editions, and revisions are included in your monthly payment and delivered automatically, as soon as they become available.

West's Veterans Appeals Reporter is a federal caselaw reporter series in the National Reporter System. It covers opinions and decisions from 1992 to date issued by the United States Court of Veterans Appeals. Headnotes describe each holding of a judicial opinion, incorporating key facts and reasoning, and synopses summarize the procedure and most significant holdings of a judicial opinion. Key Numbers and synopses are prepared by our highly trained attorney-editors.

Courts- Includes cases decided in the: