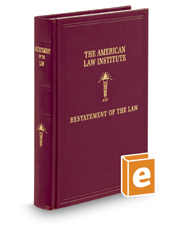 Restatement of the Law (2d) of Conflict of Laws, with Appendices

The culmination of a 17-year effort by a panel of respected judges and scholars, Restatement of the Law of Conflict of Laws, with Appendices is a complete and updated revision of original work concerning jurisdictional differences. It analyzes and explains topics relating to differences between laws in cases in which a transaction or occurrence central to the case has a connection to two or more jurisdictions. Often used and cited by the courts, this title contains the black-letter statements, comments, illustrations, and reporter's notes.

The appendix contains court citations of Conflict of Laws and tables show corresponding sections in the original Restatement, the Tentative Drafts, and the new edition.