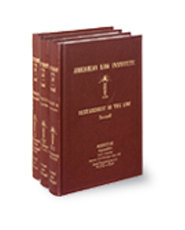 Restatement of the Law (2d) of Contracts—Appendix Vols. 4-12

• Digests of state and federal cases citing the original Restatement on contracts and the second edition, through December, 1977

• Cross-references to ALR annotations and the West Key Number System

Volume Seven updates Volume Six and contains case citations to Contracts, 2d, and Sections 422-End of the original Restatement through June 1984. Cumulative pocket parts periodically update the case citations in the Appendix volumes. The current pocket parts are included with the purchase of these volumes.