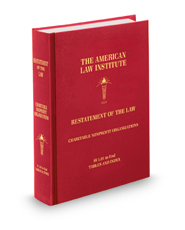 Restatement of the Law, Charitable Nonprofit Organizations is The American Law Institute’s first project restating the law of charities. This area of the law implicates many subjects, including the laws of trusts, corporations, property, and state and federal constitutions.

Although some of The American Law Institute’s projects—most notably the Restatements of Trusts—include Sections that address charities or mention nonprofits generally, none addresses the topic in an organized or comprehensive manner. This volume restates the law of charities as an independent and coherent whole, rather than as a minor note to other subjects.

This restatement is limited to the law of charities in the United States. It takes as its subject the laws governing the charitable subsector of the larger nonprofit sector—that is, all entities whose purposes are “charitable” in the legal sense of the word, as defined in § 1.01 of this Restatement. In many Sections, it also addresses charitable assets that are held by other entities.

However, it does not address the law generally applied to noncharitable, nonprofit entities such as various types of political, social, and labor organizations. Nonetheless, because the term “nonprofit” is often used both colloquially and in some professional settings as a synonym for “charity,” this Restatement includes the term “nonprofit” in its title and in various Sections.

Moreover, this restatement concerns only U.S. charities, although it encompasses charities that are legally established in the United States but operate abroad. It focuses on the duties of those governing charities, the manner in which charitable assets must be protected, and the powers of public officers and private parties seeking to protect charitable assets. As is appropriate for a restatement, this project focuses on common-law doctrine.

For many subjects discussed in this restatement—particularly those related to the definition of “charity,” governance, changes to a charity’s purpose, the roles of various regulators, restrictions on charitable assets, and standing—the common law is primary. Even in areas in which statutory law is dominant, the common-law rules are reflected in the statutes and influence their interpretation. For example, the Uniform Law Commission’s Uniform Trust Code codifies much of the relevant common law.