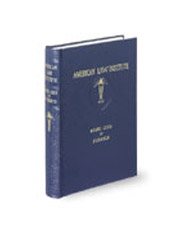 Restatement of the Law, Model Code of Evidence

Since 1923, the American Law Institute has drafted several Model Codes, addressing elements of United States law. The Model Code of Evidence was drafted in response to the need for a thorough revision of existing law. It was drafted for adoption by courts having the power to regulate evidence and procedure by rule, or for enactment as a code of evidence by legislatures. Model Code of Evidence is printed in the same hardcover book format as the A.L.I. Restatements of the Law and is also sold as part of that series.