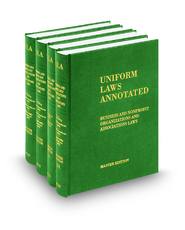 The Natl Conf. of Commissioners on Uniform State Laws

Contains, among other acts, the text of the Uniform Partnership Act (1997) and Uniform Partnership Act (1914). Includes annotations to decisions of each state that has adopted and litigated each section of law. Official Comments by the authors-the National Conference of Commissioners on the Uniform State Laws-explain the rationale of the law. Tables also indicate whether or not the law was enacted in each jurisdiction, along with citations to that state's version of the section.