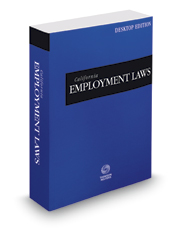 Monthly pricing
$8.00/month
Our Assured Print Pricing program offers predictable monthly pricing and capped year-over-year price increases. Choose between 2, 3, 5, and 10-year agreements. All updates, new editions, and revisions are included in your monthly payment and delivered automatically, as soon as they become available.

The book also contains selected provisions from 13 California codes, including: Editorial features include: