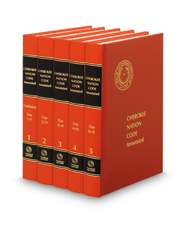 Summary of contents › Front of the book ›
Update highlights and filing ›

Included in the last volume is a comprehensive index for the entire set. The set is divided into five volumes containing: