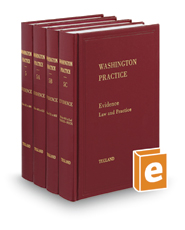 Evidence Law and Practice includes Washington cases interpreting the evidence rules since their adoption in 1979. The relevant and most current case authority is cited as well as any significant prerule cases. Tegland's expert, practice-oriented commentary discusses statutes, court rules, and constitutional provisions affecting admissibility in analyzing all Washington Rules of Evidence and associated concepts, including: