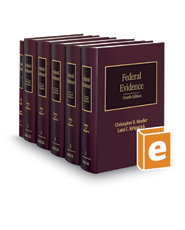 Written by two nationally respected evidence scholars, Federal Evidence, 4th is among the most cited references in judicial opinion. It is a staple of the bench and finds a place in legal libraries in every state of the country.

Even as the Federal Rules of Evidence have been dramatically amended over the years since their adoption in 1975 and interpretive caselaw has exploded, the authors have stayed true to their original mission: to provide a practical tool, both comprehensive and manageable, for litigators and judges.

Whether articulating mature and settled doctrines or dissecting emerging issues, the authors apply their combined experience of over 80 years teaching and writing on the law of evidence to their annual updates of this treatise.