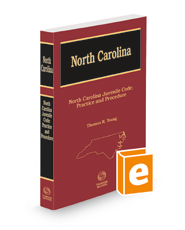 Monthly pricing
$54.00/month
Our Assured Print Pricing program offers predictable monthly pricing and capped year-over-year price increases. Choose between 2, 3, 5, and 10-year agreements. All updates, new editions, and revisions are included in your monthly payment and delivered automatically, as soon as they become available.

The only treatise of its kind, North Carolina Juvenile Code: Practice and Procedure furnishes clear, in-depth analysis of juvenile, child welfare, and juvenile delinquency cases encountered in North Carolina, including the history and philosophy behind each statute. Focusing on the procedural aspects of neglect, abuse, and dependency cases, the text also analyzes: