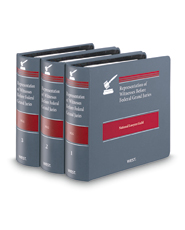 Resourceful guide addresses the issues faced by grand jury witnesses and provides expert instruction on how to best prepare clients. Offers guidance on choosing whether or not to testify, possible contempt charges, grand jury subpoenas and grounds on which they can be challenged, witness questioning in the grand jury room without counsel present, and issues concerning friends or associates who may be involved in the investigation. Covers every step of the grand jury process, from initial attorney-client contact through post-contempt remedies and appeals.

Consultation with more than one grand jury witness

Motions prior to first appearance before the grand jury

First appearance before the grand jury

Second appearance before the grand jury

Motion to show cause and contempt hearing

Third appearance before the grand jury: the testifying witness

Nature and power of subpoenas

Decision to issue a subpoena

Issuance of subpoenas under the Federal Rules

Motions to Quash or Modify Subpoena

Appeal of order denying motion to quash or modify

Checklist of possible challenges to subpoenas

Court test of validity of claim of privilege

Intervention and injunction against abuse of the grand jury function

CHAPTER 4 - SELECTION AND COMPOSITION OF THE GRAND JURY

When to make the motion

CHAPTER 6 - APPEARANCE BEFORE THE GRAND JURY

Scope of the grand jury investigation

When the witness is also the target

Right to counsel during the grand jury proceeding

Instructions to the grand jury

Refusal to take the oath

Right to disclosure of government informers

Freedom of speech and association

Freedom of the press

Right to petition for redress of grievances

Scope of the privilege against self-incrimination

Applicability of the privilege to grand jury proceedings

What questions are "incriminating"

Risks protected against by the privilege

Exceptions to application of the privilege

Waiver of the privilege

Procedure for assertion of the Fifth Amendment privilege

Subpoena of a potential defendant

Must the witness be warned of the right to assert the privilege?

Subsequent prosecution of a witness who testified under use immunity

Procedure for invoking a claim of electronic surveillance under U.S.C. ? 3504

Right of witness to raise electronic surveillance under Gelbard

Adequacy of the government?s denial or admission of illegal surveillance; disclosure

Hearing of legality of surveillance and standing to object

Making a prima facie showing that communication is privileged

Disclosure of name or identity of client

Communications to third parties in the course of legal representation

Communications in furtherance of a crime or fraud

Do the client?s documents come within the privilege if they are turned over to the attorney?

Other rights of the client that attorney may assert

Speech and debate clause of the constitution

Presidential, deliberative, and other governmental privileges

Witnesses have no obligation to maintain secrecy

Witness?s right to a transcript

Leaks to the press by government officials

Abuse of the subpoena power

Use of the grand jury to harass or intimidate a witness

Questioning to coerce perjury or contempt

Interference with the right to counsel

Use of subpoena duces tecum to conduct warrantless search

Elements of the offense

Civil contempt should be considered before criminal contempt is used

Civil and criminal contempt for a single refusal to testify

Liability as accessory or conspirator

CHAPTER 16 - OBSTRUCTION OF JUSTICE AND OTHER OFFENSES

Accessorial and other indirect liability

Procedure for application for bail and/or stay

Motion to Vacate the Contempt Order; the Grumbles Motion

Status of a civil contemnor

Confrontations with the FBI

APPENDIX C Sample Correspondence Between the Government and a Cooperating Witness

APPENDIX E Rule 6 of the Federal Rules of Criminal Procedure, as amended February 1, 1994