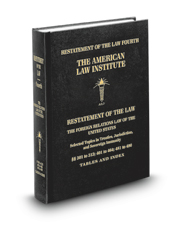 Restatement of the Law, 4th, Foreign Relations Law of the United States

This is the first volume in the Restatement of the Law, 4th series, and is a partial revision of the influential Restatement (3d) of Foreign Relations Law of the United States, published in 1987. The topics covered in this updated volume include jurisdiction, the domestic effect of treaties, and sovereign immunity. As noted in this volume's introduction, the foreign relations law of the United States is drawn from different sources, including the Constitution, congressional legislation, judicial decisions, actions of the executive, customary international law, international agreements, and state law. This Restatement of the Law distinguishes clearly among these different sources and explains their interrelationships with respect to the particular topics covered.