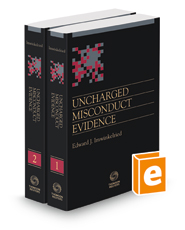 
One time purchase (Individual volumes)
Purchase the current version only, no updates will be sent.
Monthly pricing
$58.00/month
Our Assured Print Pricing program offers predictable monthly pricing and capped year-over-year price increases. Choose between 2, 3, 5, and 10-year agreements. All updates, new editions, and revisions are included in your monthly payment and delivered automatically, as soon as they become available.

Uncharged Misconduct Evidence is a comprehensive analysis of what may be the single most important evidentiary issue for modern litigators. It is the only multivolume treatise devoted to this topic – not just in the United States but in the entire English-speaking legal world.

On the criminal side, the treatise:

On the civil side, the treatise: