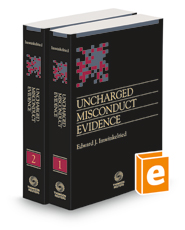 Uncharged Misconduct Evidence is a comprehensive analysis of what may be the single most important evidentiary issue for modern litigators. It is the only multivolume treatise devoted to this topic – not just in the United States but in the entire English-speaking legal world.

On the criminal side, the treatise:

On the civil side, the treatise: