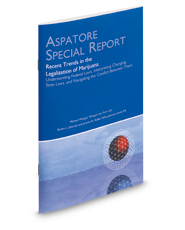 Recent Trends in the Legalization of Marijuana: Understanding Federal Laws, Interpreting Changing State Laws, and Navigating the Conflict Between Them (Aspatore Special Report)

Recent Trends in the Legalization of Marijuana gives you valuable feedback on the current laws governing the use of marijuana. Now that Washington and Colorado have legalized recreational marijuana use, navigating the conflict between state and federal laws has become increasingly difficult for clients and attorneys alike. Regulation of the industry in those states where marijuana has been legalized is still in flux and employers are reviewing their policies and practices regarding the issue. Considering the current state of change, consistently asking the right questions to obtain concrete knowledge of the issue is crucial:

Recent Trends in the Legalization of Marijuana provides feedback from some of the nation's leading legal minds on the current laws governing the use of marijuana, including the differences among various jurisdictions. These experts outline the distinction between decriminalization, legalization of medical marijuana, and legalization of recreational marijuana, and discuss defense strategies in possession cases. This report offers readers an immediate look at this issue as it continues to unfold.