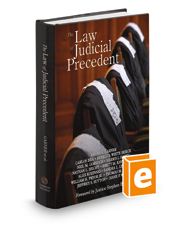 The Law of Judicial Precedent

The Law of Judicial Precedent is the first hornbook-style treatise on the doctrine of precedent in more than a century. It is the product of 13 distinguished coauthors, 12 of whom are appellate judges whose professional work requires them to deal with precedents daily. Together with their editor and coauthor, Bryan A. Garner, the judges have thoroughly researched and explored the many intricacies of the doctrine as it guides the work of American lawyers and judges.

The treatise is organized into nine major topics, comprising 93 blackletter sections that elucidate all the major doctrines relating to how past decisions guide future ones in our common-law system. The authors' goal was to make the book theoretically sound, historically illuminating, and relentlessly practical. The breadth and depth of research involved in producing the book will be immediately apparent to anyone who browses its pages and glances over the footnotes: it would have been all but impossible for any single author to canvass the literature so comprehensively and then distill the concepts so cohesively into a single authoritative volume.

More than 2,500 illustrative cases discussed or cited in the text illuminate the points covered in each section and demonstrate the law's development over several centuries. The cases are explained in a clear, commonsense way, making the book accessible to anyone seeking to understand the role of precedents in American law.

Never before have so many eminent coauthors produced a single lawbook without signed sections, but instead writing with a single voice. Whether you are a judge, a lawyer, a law student, or even a nonlawyer curious about how our legal system works, you're sure to find enlightening, helpful, and sometimes surprising insights into our system of justice.

“An amazing book. It's an essential read for anyone concerned with the state of the law.”

“Garner has enlisted a cast of judicial luminaries to examine the tools in the judicial toolbox. The result is both illuminating and, well, unprecedented.”

“Don't let the size of this book scare you off! You'll keep dipping into it for wit and wisdom.”

“This book should be at the elbow of judges, lawyers, and others who want a sure guide to the uses of precedent.”

“Clearly written, fully supported by caselaw, and impressively argued throughout, this book sheds new light on an important subject.”

“An admirable work of legal literature. This book is a pleasure to read, from page 1 to page 783.”

“Garner and his stellar panel of judges have written the bible on the role of case decisions and precedent in law.”