Ethics on the inside: What every in-house attorney needs to know 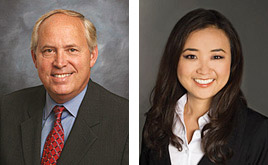 In-house attorneys deal with all the same challenges law firms face-screening off conflicts, preventing waiver of attorney—client privilege, and exercising the duty of care—but their close relationships to their employers/clients often make a difficult ethical quandary turn worse. The key to containment of ethical problems is early recognition and prevention.

In San Francisco City and County v. Cobra Solutions (2006) 38 Cal. 4th 839, the entire San Francisco City Attorney's office was vicariously disqualified from representing the city in a civil action because City Attorney Dennis Herrera formerly represented one of the defendants while he worked in private practice. Though Herrera screened himself from the litigation, the California Supreme Court concluded that Herrera's subordinates would not be entirely insulated from their boss's policy decisions or their own concerns about job security. The court disqualified the entire City Attorney's office.

In the private sector context, a different court arrived at a similar conclusion and held that screening was insufficient to avoid disqualification. In Mattel v. MGA Entertainment, Inc., 408 Fed. Appx. 45 (9th Cir. 2011), an associate representing Mattel switched law firms and began working for the firm representing MGA, the adverse party in a copyright and trademark action. In light of evidence that the associate had actual knowledge of Mattel's confidential information, the Ninth Circuit affirmed that no amount of screening could have removed the taint, and disqualified the entire law firm from representing MGA.

Although Mattel involved outside counsel, both Mattel and San Francisco show that the consequences of a vicarious conflict can be devastating. It can be even harder for in-house attorneys to recover from them. When outside counsel is disqualified, another can be engaged to replace him or her, albeit at some cost and inconvenience. The consequences of disqualification are magnified greatly when a corporate client loses the services of its general counsel and its entire in-house law department. For in-house attorneys wary of imputed conflicts and vicarious disqualification, the best practice is to identify and screen off potential conflicts at the recruiting and hiring stage, and to update conflict checks as new parties become adverse to the corporate client.

Conflicts with the employer/client

Santa Clara County Counsel Attorneys Association v. Woodside (1994) 7 Cal. 4th 525, highlights the conflicts that arise naturally for in-house attorneys when the employee-employer relationship collides with the attorney-client relationship. The California Supreme Court held that union represented county attorneys were not required to resign before filing suit against their employer in a collective bargaining wage dispute. In other words, the attorneys' duties of loyalty to the county as the client did not override their statutory right to receive benefits and protections as unionized employees. At the same time, those rights prevented the county (as employer) from exercising its usual right (as client) to discharge an attorney at will. The county was free only to reassign the attorneys involved in the lawsuit in a manner that was non-retaliatory. Woodside presents a cautionary tale more for the client than for the attorney, but it is not hard to imagine the tables being turned under different circumstances. See also General Dynamics Corp. v. Superior Court (1994) 7 Cal.4th 1164) where this issue is addressed in the non-union environment.

Other less hostile, less obvious adversity between the in-house lawyer and her client can trigger disclosure and consent obligations. Consider the in-house lawyer who negotiates his own employment contract or advises a client on stock options and other employee benefit plans: a lawyer transacting business with a client must make full disclosure, advise the client to obtain independent counsel and obtain written consent. Cal. Rules Prof. Conduct, Rule 3-300. And the transaction must be fair. A failure to follow the ethical rules may raise problems not only for the in-house lawyer, but for the client if, say, shareholders challenge the generosity of a stock option plan tainted by the failure to obtain independent legal advice.

An in-house attorney inevitably wears multiple hats when representing a corporate client, especially when the lawyer's personal interests are in play. Better to play it safe, make the required disclosure and obtain the advice of independent counsel.

Jasmine Networks, Inc. vs. Marvell Semiconductor, Inc. (2004) 117 Cal. App. 4th 794, withdrawn, Jasmine Networks, Inc. v. Marvell Semiconductor Inc. (2004) 94 P.3d 475, illustrates another kind of problem that arises when the in-house attorney wears multiple hats. The case involved an inadvertent voice mail: the general counsel/officer of Marvell made a call to Jasmine's lawyer, left a message, tried to hang up, and then proceeded to have a private conversation with another Marvell officer and its in-house counsel. They continued to be recorded on the voice mail. The Court of Appeal allowed Jasmine to use the recording as evidence, holding that any privilege Marvell might have asserted had been waived. The court acknowledged that an attorney's inadvertent disclosure generally does not waive attorney-client privilege. But here, the fact that the general counsel was also an officer of Marvell made him the holder of the privilege, and his uncoerced disclosure of information constituted waiver.

The harsh result of Jasmine has since been tempered by the California Supreme Court's decision in Rico v. Mitsubishi Motors Corp. (2007) 42 Cal. 4th 807, which depublished Jasmine. Rico, however, goes to the opposite extreme and holds that disqualification is the proper remedy where the lawyer reads and uses as evidence an inadvertently disclosed work product document. The attorney had a duty to return the document as soon as it became apparent to him that the document was confidential. Rico conflicts with Jasmine only insofar as it makes it more difficult to waive confidentiality through inadvertence.

But unlike Jasmine, Rico does not address whether a lawyer's duties change if he is in-house counsel, since all the lawyers involved were outside counsel. One could imagine a future court arriving at the same conclusion as Jasmine if the inadvertent disclosure were made by an in-house attorney who was also a corporate officer. The uncertainty is compounded by the fact that the rules may change with different forums. For example, in a case before the Court of Justice of the European Commission, Akzo Nobel Chemicals Ltd. and Akcros Chemicals Ltd. v. European Commission, Case 550/07 P (2010), the court held that no attorney-client privilege attached to communications between in-house attorneys and corporate officers because the attorneys were not "independent."

The bright-line rule to take away from these cases is that there are no bright-line rules. When it comes to privilege and waiver, in-house attorneys must stay constantly vigilant of steering between Scylla and Charybdis—aiving privilege, as in Jasmine, and disqualifying themselves, as in Rico.

It should come as a shock to no one that the ethical rules frown upon intimate relationships between attorneys and their clients. The same rules apply to an in-house attorney; the fact that an in-house attorney's client is the corporation does not open the doors to dating all his or her coworkers. Where there is an organizational client, both the ABA Model Rules and the California Rules of Professional Conduct define the "client" as any person overseeing the corporation's legal matters.

The good news for California lawyers is that the California rules are slightly more lax than the Model Rules in matters of the heart. ABA Model Rule 1.8 strictly prohibits intimate relationships with clients unless the romance predates the legal representation. California's Rule 3-120, on the other hand, allows intimate consensual relationships to bloom at any time and to continue through a lawyer-client relationship. The only restrictions are that the relationship cannot be based on a quid pro quo exchange of sex for legal services; employ coercion, intimidation, or undue influence; or interfere with the lawyer's ability to provide competent legal services. There is no absolute prohibition in California against romantic relationships that were initiated before the legal representation, and unlike the Model Rules, the California rules do not impute romantic conflicts to other lawyers in the firm. While the California rules do not draw as bright a line as the Model Rules on the ethics of dating, the practical point is easy enough to follow: don't get distracted by an office romance, and don't do things that are normally considered sexual harassment. That can raise another issue under Rule 2-400, prohibiting discriminatory conduct in a law practice, including harassment.

Given the variety of challenges that an in-house attorney might face, it is hard to say that there is an easy fix for all the potential ethical pitfalls out there. An in-house attorney can only exercise his or her best judgment, and avoid the red flags before they ripen into actual problems.

Bill O'Hare is the Administrative Partner of the Orange County office of Snell & Wilmer LLP. His practice is concentrated in commercial litigation, arbitration, and mediation including corporate, partnership and trust disputes, franchising, intellectual property and unfair competition litigation, and class action defense.

Jenny Kim is an associate in the Orange County office of Snell & Wilmer LLP. Her practice is focused on commercial litigation.